Vacation Marbella hosted its first press trip recently when a group of seven UK golf journalists was invited to experience this wonderful region of Andalucía.

In association with leading marcomms specialist the Azalea Group, the three-day fact-finding mission proved to be an enormous success as the party enjoyed rounds at Los Naranjos and Rio Real golf courses, as well as savouring the culinary delights at the hugely popular Trocadero Arena, and visiting the Viejos Descalzos winery, all while staying in the modern accommodation at Vacation Marbella’s Paradise at Medina de Banus.

Property rental company Vacation Marbella has long been regarded as the premier provider of high-end apartments in the heart of the ‘Golf Valley’ and we already welcome more than 10,000 visitors a year to our growing portfolio of accommodation options.

The press group stayed at the Medina de Banus gated complex, situated just a short walk from Puerto Banus’ famous harbour. All the modern apartments have benefited from a total refurbishment, meaning guests can enjoy all the mod-cons and luxury you would come to expect from Vacation Marbella.

The development, with 24-hour security, boasts a large outdoor swimming pool and carefully landscaped gardens offering ultimate privacy. And the jewel of Medina de Banus is the Medina Luxury Penthouse, which, while modern, manages to maintain traditional Spanish-style architecture.

With incredible sea views from its spacious balcony, the six-bedroom 300m2 apartment highlights our commitment to luxury and comfort, coming complete with private pool, sun-roof terrace and BBQ, pool table and, even, sound-proof windows.

And it was this impressive setting where the assembled press enjoyed their first taste of Marbella, with local chef, Elvira, cooking a selection of delicious tapas-style foods, washed down with some of the local wine and a few beers.

Having been dubbed the ‘Golf Valley’ we are spoilt for choice here in the Marbella region given  there are 15 courses to choose from on the doorstep, and the UK group was invited to play Los Naranjos and Rio Real under clear blue skies and temperatures averaging 21C.

And both courses proved hugely popular with the first round at the Robert Trent Jones Sr-designed Los Naranjos, a course that was described as “in pristine condition”, according to the party.

Golf 365’s Pat Mooney wrote: “RTJ considers Los Naranjos – opened in 1977 – as one of his finest European designs. Yet, the two nines are quite different with the front nine the stronger – water comes into play numerous times. The front nine is more challenging with several stand-out holes.” 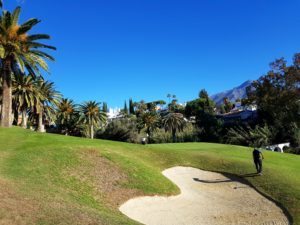 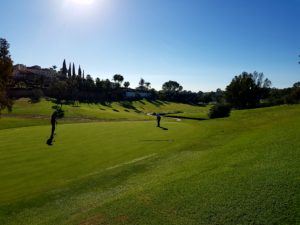 What we have discovered at Vacation Marbella is journalists love to eat! And they were not disappointed with the clubhouse food at Los Naranjos as they relived their birdies and pars – but mostly double bogeys – in fabulous and modern surroundings.

The Costa del Sol is well known for its sparkling Mediterranean waters, but the scenery inland is equally as stunning, and one gem is Ronda, the mountain-top town, that, although just a 40-minute drive from the colourful trappings of Puerto Banus, feels a million miles away thanks to its unique historic charm.

Ronda sits above the El Tajo gorge and a 100m chasm, and next to the 18th-century Puente Nuevo bridge offering unrivalled and breathtaking views of the Serrania de Ronda mountains.

Spain has become the world’s largest wine producer and the Andalucia region is home to Descalzos Viejos, meaning Old Barefoot People. Originally a monastery, the 16th-century building is now fully renovated and home to a winery thanks to the imagination and dedication of owner Flavio Salesi, who arrived in Spain from Argentina, in the mid-90s, with just a bag and a dream.

Golf Punk’s John Dean wrote: “Vacation Marbella are keen to show us there is much more going on in Marbella than just golf, so we head to Ronda, high in the mountains, and a 40-minute drive away, for a wine tasting session. 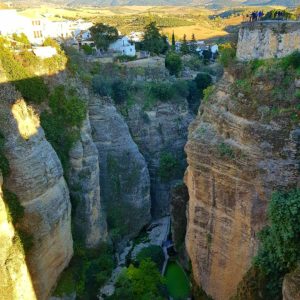 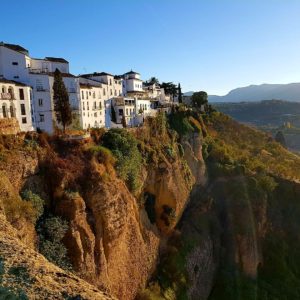 “But it’s wine tasting with a difference. The winery is the creation of one Fabio Salesi, who had the mad-cap idea of buying a wreck of an old monastery at Descalzos Viejos, and turning it into a winery. And 23 years later, they are producing some wonderful wines, which you can go and savour.” 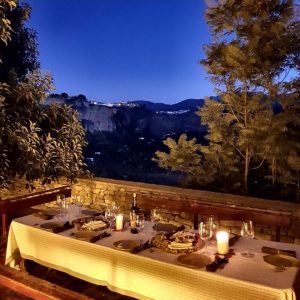 Rio Real was the second course on the itinerary on the final day and the Javier Arana-designed layout, which is situated on the doorstep of Marbella town, went down a storm with the assembled hacks.

The aesthetically pleasing course winds its way through a variety of native trees, such as pines, palms and olives, with unrivalled views of the Mediterranean on some of the holes.

“Then we were on to Rio Real Golf Club, which is a little cracker, with some really idiosyncratic holes,” Golf Punk observed.

“The course was designed by the legendary Javier Arana. It’s amazing how they have fitted this course into such a tight piece of land, but they’ve done a fine job of it, and it’s an engaging and fun track, which will constantly keep you on your toes.”

Mooney added: “Rio Real is a much tighter track and situated just three kilometres east of Marbella. Designed by renowned Spanish architect Javier Arana it first opened in 1965 and has a river running through the course – from which the club takes its name.”

Last, but certainly by no means least, was a visit to Trocadero Arena, Marbella’s highly-rated beachfront restaurant, the safari-themed diner just minutes away from Rio Real, where guests can relax and enjoy locally sourced seafood and paella, as well as international cuisine, and sip a cocktail while watching the sun set over the Med. 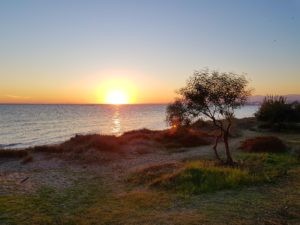 Golf Shake’s Owen Davies declared in his ‘blog’ that the Marbella region boasted some stunning scenery off the beaten track despite being a short drive from the bright lights of Puerto Banus.

He described the ancient town of Ronda as being “beautiful” and giving a “real taste of Spanish culture”, with the old Descalzos Viejos monastery a must-see site for travellers.

Davies’ ‘blog’, which featured our Medina luxury penthouse, finished his feature with a glowing reference to hosts Vacation Marbella, emphasising our array of guest services, such as car hire, reduced green fees and baby-sitting.

Vacation Marbella was delighted to host such a press trip and we look forward to seeing and reading all the outstanding positive comments over the next few months.